Former House Speaker Nancy Pelosi (D-CA.) has used chaos among the Republican caucus to add to the war chest of Democrats.

As Republicans entered the 14th vote to elect a Speaker on Friday (January 6) night, Pelosi capitalized on the disorder, writing a fundraising email about what was at stake.

In the message, Pelosi highlighted that Republicans had “failed 13 times to choose a Speaker of the House.”

The email also emphasized the record-breaking nature of the event, noting that “they’ve stalled the House from getting to work.”

Pelosi mentioned that Democrats were “ready and waiting to get to work,” contrasting that with the GOP, who she described as wanting to “disrespect the institution and the American people.”

In the fundraising email, Pelosi pointed to fighting within the GOP as the foundation of her belief that Republicans were “absolutely incapable of governing.”

Pelosi then shared that it was necessary for “Democrats to rise up and show we are united [and] ready to get to work,” adding that Democrats needed to “defend every ounce of progress from Republican destruction.”

The fundraising email then asked the 2,621 Democrats to donate $15 each for “financial resources” that the email states would help “defeat Republicans’ extreme agenda and reclaim our Majority?”

The email also shared that even when Republicans elected a Speaker, it wouldn’t change “their extremist agenda” which she believed “will hurt everyday Americans the most.”

The California Democrat added that Republicans would likely “threaten to hold the debt ceiling hostage” in addition to Social Security and other “freedoms.” 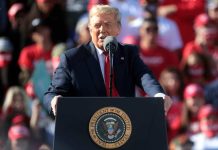